An ECG is simply an Expandable Card Game. Dungeon Crawler™ is no longer a collectible card game, even though the cards have a rarity classification system, all of our ECG products are non-random. The rarity found on our cards just lets you know how many can be expected in a full set; Rare = 1, Uncommon = 2, Infrequent = 3 and Common = 4.

To play you will need an Unbound Starter. This contains everything you need to start playing the 1 player Story Mode games or the 2 player Co-operative games. This is the core version of the game and can stand alone, you never need to expand your collection further.

You can play a 2 player co-op game with your Starter... just at a Starter scale! Which is actually really good for showing someone how to play. Encounters are 6pts, the Dungeon gets 60 cards, each player gets 2 Adventurers and 30 cards - and you're ready to GO!

Professionals and gamers alike have experienced Dungeon Crawler ECG, read their reviews here. You can also check out our ratings and reviews directly on board game sites like Board Game Geek.

So, you are interested in our game, but you live in the UK, how do you get our game? A store front might be able to get them through distributors such as; Impressions or an indie distributor called Indie Press Revolution (IPR).

What To Get After

To expand your collection further you can pick up one of the five Delve Packs. These non-random packs contain 52 cards, now printed in the USA, with new Adventurers, Quests and a mix of new cards and useful copies of cards from the Unbound Starter to bolster both your Dungeon and your Crawler decks. There is Keldorna (filled with traps), Stonehold (focusing on Undead and Goblins), Outlands (focusing on terrain), Sylvan Woods (focusing on poison), and Barren Mountains (focusing on Stealth and big monsters). The Delve Packs have been reconstructed as v2.0 to work better with 1 full set games instead of a randomized format intended for up to 4 copies of the game. Check the specific game format rules to see limitations on how many copies of each card you can have in a deck. 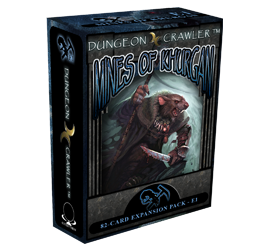 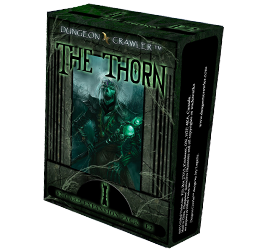 Now available is our The Thorn Expansion Pack an 82 card, non-random, all new art, intense pack focused around the Undead and lead by a Lich lord named Zhuldar! This pack also includes two Resource Tracking cards for game play. Rate The Thorn on BGG.

A Variety of Game Play

Spice up your ECG game and try the "Wild Card Scenarios"! This variation of the game lends an element of surprise and challenge to the game play. Check out the first adaptation of this under Campaigns. Our Campaign section has Dungeon deck builds already designed for players that want to face something pre-built.

To really ramp up your difficulty we've introduced The Scenario Packs a 52 card, non-random, all new art, 4 brutal event-based deck focusing around 4 very different Scenarios that have you battling a Colossus, a Cult, the Damned, and even an Ancient Dragon! This pack will also include a new rule card, and promo cards. Check it out on Project-Fuel.

You've just picked up the Starter and you want to play, but you don't know where to start! This pdf is a step by step guide for you to use with your brand new Starter. It will tell you to build 2 small decks of 23 cards from your Starter pack and then step-by-step show you what happens during a game and why.

This will cover; encounter builds, combat, stealth, pulls, flips, busts, draws, discards and much more. There are 7 full Rounds of play included to give the fastest and broadest experience of the Solitaire format for beginners.

For those of you that prefer to have a video demonstration, we have one available below which will go through all of the steps found in the pdf.

This interactive tutorial is a completely different game play sample that will cover playing a 4pt beginner Story Mode match. You will need Flash installed.

PLAY THE BEGINNER TUTORIAL Part 1 of 3

PLAY THE BEGINNER TUTORIAL Part 2 of 3

PLAY THE BEGINNER TUTORIAL Part 3 of 3

Our recommendation is to review the introduction and print out the Attributes as needed!

If you would like a downloadable copy of the Solo Play Mat we have provided it for FREE here.

Next we recommend checking out the rules.